Criteria: What is a Celebrity?  What defines its meaning?  Who knows, but I’ll suggest that for this list it may include a movie star, a politician, a business man, or an athlete.  In defining what is meant by “meeting”, I’ll suggest it has to be beyond the normal “I met you”.  I once met Jimmy Carter the president but it was when he was at a book signing, so he does not make the Bob Mims CPA list. Lastly, the criteria must include an interesting nugget, tidbit or story about the encounter.

While at a conference, I took some time to swim some laps at the pool.  At the end of my workout, I had this weird feeling I was being watched and there was no one else on my side of the pool where I was.  What I did see was a little girl struggling to swim, so I let her borrow my goggles and I gave her a few tips.  I sat next to her mom and aunt for a bit and listened to them talk and they even started singing a few songs to each other.  Oblivious, Bob Mims CPA struck up a conversation with the little girl what her favorite movie was.  She said “the Preacher’s wife”.  Things started to add up, and yes I was talking to Whitney Houston and her daughter Bobbi

Conservative Supreme Court Justice happened to also be an avid duck hunter.  He was brilliant and kind; regardless of your political views, there was no denying his smarts and nice demeanor.  That was true of my experience as I asked him about his tennis club, The Washington Golf and Country Club.  He loved the game of tennis and it was a pleasure to talk with him 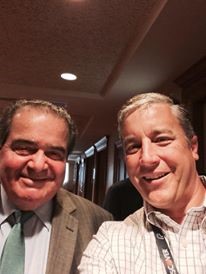 Bob Mims CPA had the opportunity to meet Dick Cheney and he was also very kind.  I had one comment for him which related to his absolute dominance in the vice presidential debates.  I’ve watched a lot of debates in my time, and his was the most lopsided I have ever seen.  Mr. Cheney pulled me aside and said “Bob…let me tell you the secret to a great debate”.  I was captivated to hear his answer.  He said “Make sure you spend the day before going fishing to clear your mind”.  He was serious. 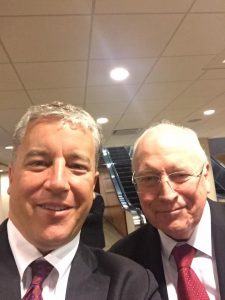 When “The Firm” was filmed in Memphis, Bob Mims newly fresh CPA was able to be an extra in the film.  You can see me just after the Gene Hackman credit roles in the movie.  The cool part of that day was also being a “stand in”.  Tom entered our room to film the scene for Sydney Pollack and I looked at him and just blurted out “that is the worst tie I have ever seen”.  Tom laughed.  The movie turned out pretty good, but unfortunately I did not get to meet Gene Hackman.

My dad bought a share of Berkshire Hathaway stock so that we could go to the shareholder’s meeting held in Omaha.  It’s a great weekend with a bunch of wall street types and other CPA’s trying to glean the wisdom from America’s greatest investor.  The highlight was getting to meet him at Gorat’s steakhouse and I noticed he was drinking a cherry coke at the bar.  I asked him about it and he said “I live off this stuff”.  It warmed my heart, because it remains my very favorite drink.  When I feel like a 10 year old for ordering it, I remember that if it is good enough for Mr. Buffett, it is good enough for me.

John is another duck hunter who is a really genuine guy with a great ability to tell stories.  One of those stories is told about his going to an Apple Store to have his wife’s phone fixed and the employee helping him recognized who he was.  Funny funny story. 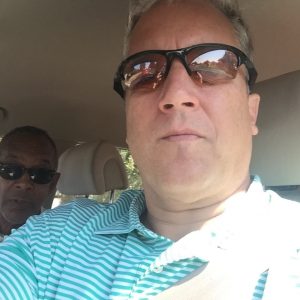 Maybe not as well known, but Jim Kennedy is a great US businessman.  He is also a member of Augusta, so I took an opportunity to ask him about his first round as a member.  Jim shared the story and some others about the course and his membership.  Someone interrupted our conversation and began telling a 15 minute story to Mr. Kennedy of how he got to sit on the front row at the Masters.  After this story was told, he turned to Jim and said “Jim have you ever been to Augusta”.  Jim replied with all the class in the world “A time or two.”

Even though he is a big LSU fan, David is a great major champion who is a super representative for the PGA.  Watching David and his teacher conduct a clinic at David’s signature course was such a delight and so much fun.  It was an insiders view as to what it takes to be a pro at the great game of golf.

Most know him from the NCAA tourney or the Super Bowl, but Jim is best at the Masters.  Meeting the nicest celeb ever was a real privilege.  He spoke of his winery and his family with Bob Mims CPA and my best friend and wife.  He did not have to take that time, but he did.  He then gave us permission to go into the Cypress Point Golf shop and buy a shirt.  What a great guy. 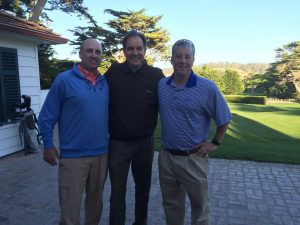 Eli used to live across the street from my sister.  He is one great rebel and giant.  One night when my sister was winding the dogs down by letting them chase a tennis ball in the park between the houses, Eli flagged my sister down and said “Missy…are you throwing those balls for the dogs?”  My sister pulled out her tennis racquet and said “No…I’m hitting the ball with a racquet”.  Eli replied “I was about to say you have one hell of an arm”.