Criteria: Movies that have made an impact on me. These are tough because it is such a broad category including comedies, drama, or thrillers. What defines a great movie is personal. These are the criteria for Bob Mims CPA
1. Movies that bring you into it. A movie that makes you forget you are watching a movie
2. Movies that make a point whether it is laughter or a line or a bunch of lines
3. Movies you would not mind watching over and over on a deserted island
So with this said as the criteria recognizing the above, Bob Mims would offer the following best ten movies of all time
1. Hoosiers

Since Gene Hackman is my favorite actor, this is easy. I love basketball and the true story aspect of this drama that portrays a coach and his team offering multiple life lessons along the way and is not afraid to tackle challenging issues (alcoholism). “I love you guys” is my favorite line of any movie made. Side note: I got stuck in the ride “it’s a small world” at magic kingdom and my son said he thought he recognized the dude in the boat in front of us. Sure enough, he was right as Brad Long who played Buddy was sitting ahead of us. It was fun visiting with him about Hoops and Hackman 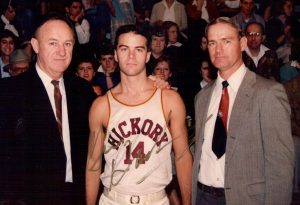 2. Raiders of the Lost Ark

Indelible imprint as this movie made an impact in a way that Bob Mims did not remember where he was at the end of the show.  The adventure is on and the little known professor was the hero.  Timeless and the effects were fantastic.  The scene where he shoots that guy with the sword is priceless.

This movie is good over and over and over again.  Morgan Freeman, who lives really close to Memphis and loves Ole Miss, is crazy good in this movie.  It fits the criteria well in that this is a movie I made the boys watch on a vacation.  They were sucked in after twenty minutes of complaining and is now my middle son’s favorite.  My good friend recently told me “Bob Mims…who crawled through a river of crap (edited) and came out clean on the other side”.  Great life lesson and quote

4. Lord of the Rings

Unlike Raiders, this movie is in the category of one long great movie split into three parts.  Having read Tolken’s books, I was astonished at how well this story on the big screen was told by Peter Jackson.  I remember in Gandalf’s first scene saying “this is exactly how I pictured him when I read it”.  One of the best lines is in the Two Towers: 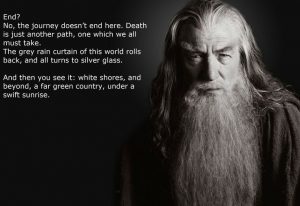 What a great comedy that started a new phase of comedies.  Riddled with one liners, Bob Mims continues to say these years after the movie:

Most people say to Bob Mims…”you’re a CPA, surely you know that everyone thinks the Empire strikes back is the best of the Star Wars movies”.  My answer is no.  The best is the first movie or the fourth however you are counting them.  Without Star Wars, there is no franchise and having watched it last week, I am continually amazed at how this movie’s effects have stood the test of time even though technology has advanced so much.

7. Monty Python and the Search for the Holy Grail

What’s your favorite color?  This irreverent movie is another that the kids have enjoyed in a way that says “Dad, maybe you were not such a nerd after all.”  John Cleese is wonderful and the team that thought through this are so creative.  Kudos to the “I cut you arm off scene” and the brilliance of including a reference to the outstanding TV show “Connections” was amazing. 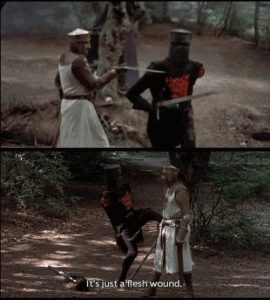 The two lines among many here including:

This movie has lots of underdogs that turn out to be winners when they figure out life.  This movie was different in so many ways and made such a positive impression on my view of counseling and coaching.  So I am a CPA, but Bob Mims also loves coaching and Robin Williams is great at reading his client and offering what he best needs.

Another comedy that wore out the Robert Mims 50 pound VCR in college.  “Cats and dogs living together…mass hysteria”.  Bill Murray launches up there as one of the funniest humans alive in that he can just be in character and be funny without delivering a line.

“There is something I must tell you…I’m not left handed”.  The best TV actor today is Mandy Patinkin and he plays Montoya in delivering this outstanding line of the best family movie to round out a top ten.  Underdogs play a role here and Bob Mims and Memphis have always resonated with the underdog role.

There you have it.  You may be saying.  I have seen all of these.  OK, but if you can identify with all of these movies, then coming next are the top ten sleeper movies you may not have seen.  If you are like me, meaning you are a CPA that lives in Memphis and whose name is Bob or Robert Mims (which would be a bit weird), then you are always wanting great movie recommendations.  These top ten above establish my likes.  If you don’t like the above you won’t like the other suggestions and vice versa.